Supersedure is the natural way of re-queening.  The bees replace an existing queen with a new queen in the same hive.  There are many reasons that this can happen, some of the most common reasons are:

Supersedure cells will often be in the middle of a frame, not at the bottom of a frame like you would see with swarming.

In our case we believe the bees sensed the queen was getting old (she is over a year old now) and decided they needed to replace her with a younger queen.

It was truly a sad sight to see our good old queen right next to the cells of the queens that would eventually take her place. 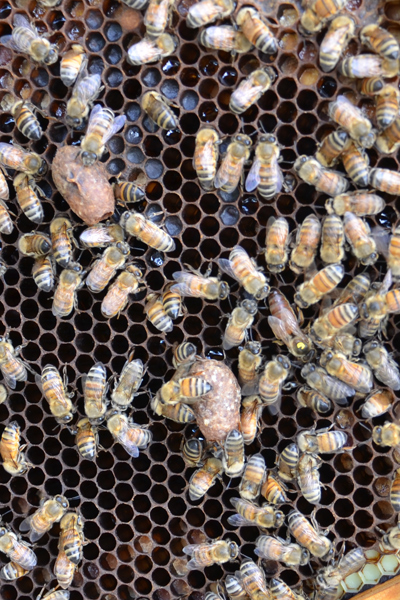 You can see 2 large queen cells on the left and our old queen with a yellow dot towards the middle on the right side.

Allowing the bees to produce their own queen is usually not successful in our experience. This is due to the fact that we don’t have enough hives to produce a really good drone pool and the chances of the queen mating with an Africanized drone are possible too.  So this hive will either be re-queened with a hygienic queen that we will buy from a local supplier or we will combine it with another hive.

We requeened a few of our hives this weekend. We buy our queens from a local supplier. I took a short video showing how we install the queen cage. You can see the bees immediately smell the queen and come towards the cage to release her. The tip of the cage is full of fondant. The worker bees will eat through this and release the queen into the hive. We usually go back in 24 hours to check and see if the queen has been released. If not, we open up the cage and set her free into the hive. The next week will be crucial to make sure that she is fully accepted and will begin laying eggs. It is best to leave the hive alone for the next 7-10 days.

In the 2 years we have been keeping bees, I have never seen a round queen cell.  Most queen cells are elongated, but this one is a round ball.  A week ago this hive was doing fine and had a queen, then while inspecting them we noticed they were a little aggressive.  My poor husband got stung 4 times and finally put on his gloves. We looked and did not see any new eggs and searched for the queen, but did not find her.  There were 3 other queen cells in the hive too.  Maybe the queen died from natural causes? Maybe she was rejected from the hive for some reason?  Who knows for sure.  The queen cells look like emergency cells, so we left them as is and will check this hive in 2 weeks.

A round queen cell. 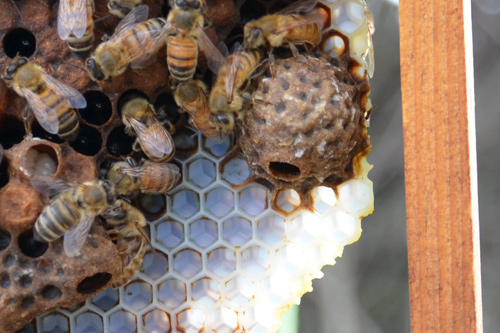 Close up of round queen cell.

We were finally able to inspect our hives after all the rain.  Our first priority was to check on the hive we combined and were trying to requeen.  Status = failure.   Our requeening efforts were not successful.  Upon opening the hive we discovered some new capped brood, but no new eggs and no sight of the queen.  Then we saw this…

An emerging queen!!  Something we have never seen before. Very exciting!!

Then we realized she was damaged. Not good! She was missing her right wing and did not look good in general.

But we have hope, we found about 10 more queen cells in this same hive from the new brood that was laid, so we are pretty sure we will have another new queen within a week.

As we continued checking our swarm nucs, we saw some good progress going on.  The burr comb we attached to a frame with rubber bands was fully built and already had honey. 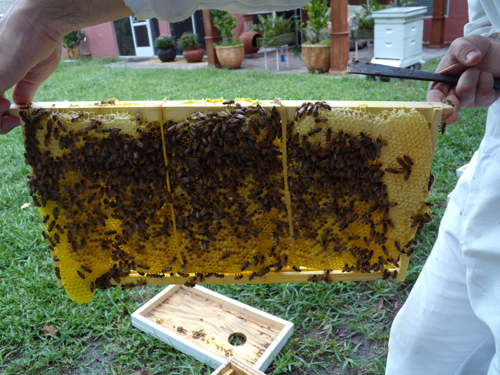 And finally, we saw the new queen of this nuc, very large and impressive. 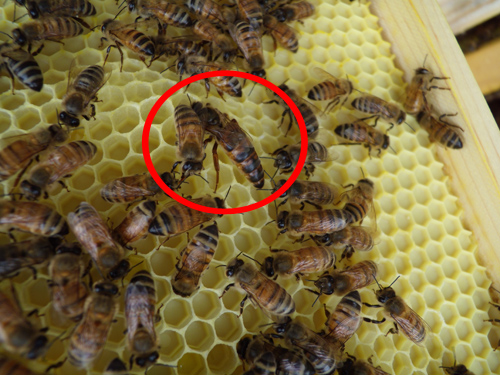 The hive that did not swarm was not behaving well lately.  The bees seemed a little bit more aggressive than our other hives, plus we noticed the queen was not performing well.  So what do you do in this type of situation? Requeen!

This particular hive had 2 deep chambers. We put a queen excluder between the two for a about a week so we could easily determine which chamber the queen was in, by looking for eggs.

Right away when opening the hive we noticed something – the top chamber that did not have the queen was very calm and gentle.  The bottom chamber where the queen was, the bees were still aggressive.  We found the queen and quickly ended her life – no pain or suffering.

Once that part was over with, we left the hive queenless for a few days. We went back after a few days to check for any queen cells.  We found a couple and destroyed them.

Our next step was to combine one of the newly swarmed nucs that had a new laying queen with the bad behavior hive.  We put a piece of newspaper, with some holes poked in it, in between the new hive and the old hive.  The newspaper allows the bees to smell each other, but not attack one another.  The holes in the newspaper help them to start chewing through and eventually the two hives are combined. 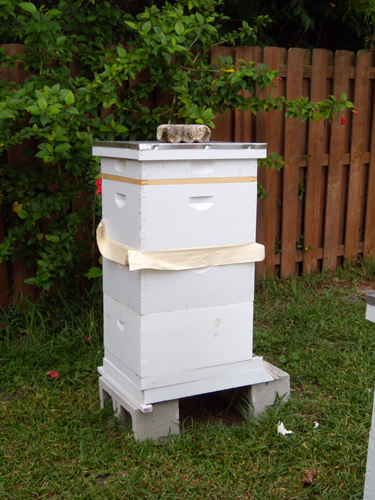 We are allowing them one week to get combined and reorganized within the hive and then we will check on them again.  Stayed tuned to see how it works out.